Crisis Messenger
Home › Anything Goes
Jordan from Switchboard will be here Wednesday and Thursday this week to answer your questions on anything to do with sexuality and relationships - leave your questions over on this thread
Head over to this thread to submit a song for our February 'Love' playlist that we'll be putting on Spotify!

Today at school in my English lesson we had a very different starter. It is usually related to Macbeth which is what we are currently studying. However today we saw the 7 minute writing challenge. We had 7 minutes to do a piece of writing about whatever came into our minds. When we asked why we had to do this, the teacher showed us the next slide of the PowerPoint which told us about National Writing Day. This day is held on 26th June every year and is about getting people to do creative writing and write care free. I have decided to share my work with everyone and I have made an effort to keep it anonymous and safe. You will probably all be surprised at how neat my handwriting is because it is usually very messy or large. But today it was neat and a bit smaller than usual.

Here it is. I did a photo and I typed it up in case anyone still cannot read my handwriting.

Please excuse the mess on my desk. That has never changed and probably won't. That is nothing compared to what it is usually like- especially with my maths notebook. It doesn't even look like a book anymore because it is partially ripped and there is so much paper stuffed inside of it.

In this place I enjoy the peacefulness and beauty of Skopelos. I love how large yet quiet this Greek island is. It was once said to be on the side of Aphrodite's fountain and if you were to drink the water you would find true love and perfect happiness. Skopelos is quite far yet fairly local to the Greek mainland. It is just a 1 hour boat ride from the port. A memory that I have of this place is discovering that Meryl Streep and Julie Walters starred in Mamma Mia which was filmed in Skopelos as well as 2 other Greek islands. Some younger characters such as Amanda Seyfried also travelled to this beautiful paradise to star in the best film ever. If Skopelos was Siri, it would constantly play ABBA music as well as calm, peaceful sounds such as the sparkling, warm, tranquil sea. 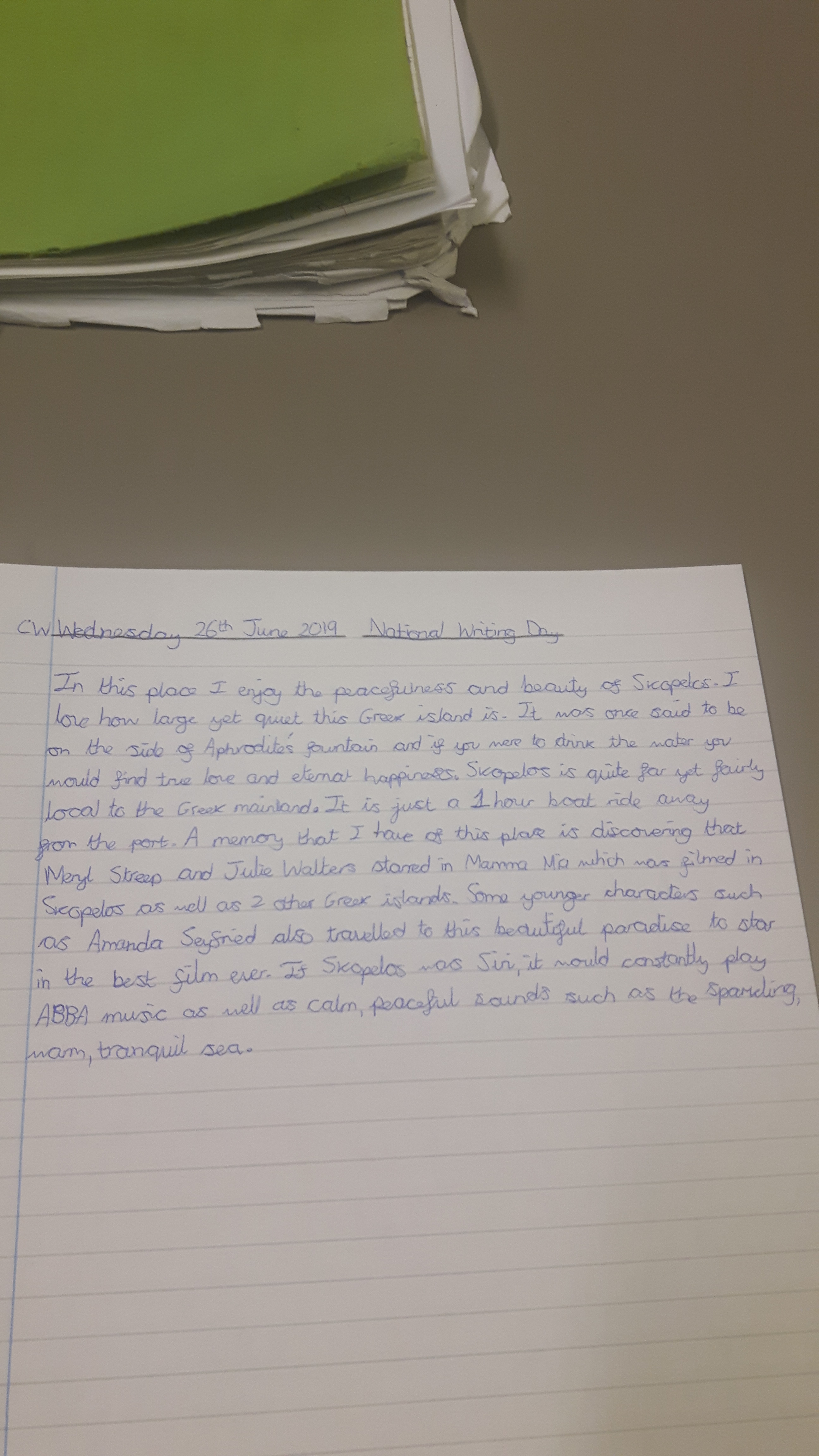 I challenge everyone to do some creative writing for just 7 minutes today. It doesn't matter what it is about or whether it is 1 line or 20. It can be any length of any topic. Just put it into a spoiler if it could potentially be triggering at all. And stick to the guidelines of the discussion boards.

Even if you're little you can do a lot. You musn't let a little thing like little stop you. If you sit around and let them get on top you might as well be saying you think that it's okay, and that's not right. And if it's not right you have to put it right.